Zerr, Germany: “We do our job efficiently, and it gives more and more results every year”

Valentin Zerr,
Vice-President of the HMB club “Zitadelle”,
fighter of the National Team of Germany

About the movement in the country and the National Team captaincy…

…About the movement in Germany We have role-playing, living history, and fencing done according to historical sources (medieval literature), craftsmen… blacksmiths and gunsmiths…

As for full contact battles, this sphere is very young. Ten years ago, there was simply no need to acquire any special physical skills or buy special armor to be a real knight. There was no need to charm audience. Those who dealt with that stuff, were, as a rule, misunderstood by the most men of the movement, or they did not know how to develop.

When “Battle of the Nations” appeared, the medieval movement realized that full contact battles were not a whim of some individuals, but a serious sphere in the medieval movement which is growing and developing now, year after year. However, to date, among the German movement, which, as I has mentioned above, deals with different areas of reenactment, there is not more than five, maximum ten percent of people who like, or at least are interested in full contact fighting. As I know, other Western European countries have similar situation. 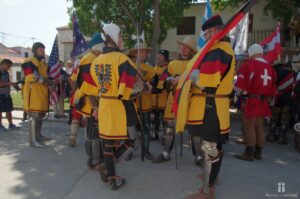 There are a lot of difficulties… I think it’s difficult to work where the movement is already formed, “fight” for a niche in it. It’s hard to deal with the already-formed opinions in the recognized movement. It’s hard to show people that their old experiences and knowledge are not absolute truth.

In addition, the movement development is hindered by ambitions and “games of thrones”. They are the second big obstacle.

Concerning our future plans… We’ll develop in the same way as before. We just do our job efficiently, and it gives more and more results every year. …About the National Team captaincy

As for the captain of the National Team for “Battle of the Nations”… We decided to choose the captain every year specifically for the upcoming “Battle of the Nations.” The fact is that, apparently, many think the captain has some privileges and higher personal status in the movement. Very few people understand that the position of the captain is primarily hard work. And very few have a clear idea how to work properly. So, we decided to make the position of the captain temporary. Thus, we allow different candidates to express themselves and show their captain qualities. We hope that in a few years we will have several able people to take the post for long and help each other, if necessary.