14 Dec 2017 14:29
2016 is a year of the “White Company” HMB club establishment. It happened not so long time ago, but UK guys took historical name for their union. “White Company” was a 14th century mercenary company operated within Italy, it was largely comprised of English men at arms and archers and was also knows as “The English Company” under the leadership of John Hawkwood. ‘’But why did you choose this name?’’, an HMBIA news reporter asked. Here is a continuation of the story that fighters of the club told us: “Several of us were familiar with this historical company so when it came to deciding on a name and coat of arms we quickly agreed that “White Company” – best reflected us as a team in terms of outlook and attitude”. For now, they have ten registered fighters, as well as club members, who fulfil a support role at tournaments. As they told, clubmates, with their captain Lukas Kowal, are real friends! Guys usually train together as often as possible, often travel around Europe attending tournaments, and if they have a weekend off from training after a tournament, they also like spending time together relaxing, usually with a lot of BBQ.

Some of the “White Company” sportsmen confessed that, as individual fighters, they trained strength, endurance and mobility with sport specific exercises throughout the week. They meet as a team as often as it is possible to train in armour, this training shifts according to what they are training for – a WMFC event or a HMB Buhurt event. Athletes work on their technique as well as on teamwork, and it is a crucial thing for them. As individuals, a lot of our fighters are striving to compete and progress within WMFC. “White Company” members:
“Our goal is to continue to win tournaments we attend, we are not focused on having the largest club, our focus is on having the strongest team who fight and train regularly. Our more immediate goal for next season is to win the Buhurt League Western European Conference. Our long term goal is to win the 5v5 category at BotN”.

So as we see, “White Company” is a small, but such a tough club. Its guys are aimed at the result and approach the trainings in a complex way. Even having a rest, they are a real team and work on the list as a massive machine. HMBIA News wish them to reach their goals and can`t wait to see them on the lists of the World Championship in HMB “Battle of the Nations”-2018 in Italy. 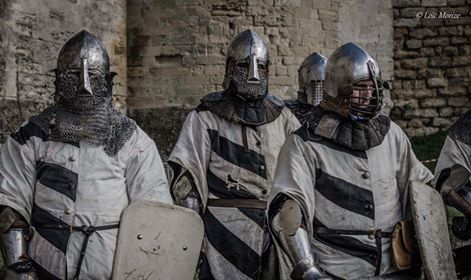