14 Oct 2017 18:35
Berlepsch Cup has been held on 30.09-01.10 in Germany. The event remembered for participants as a spectacular international level tournament with a high-quality organization.

Berlepsch confidently declares itself as one of the best tournaments in Europe. Despite the hard-driving program and hours of fighting, which made fighters exhausted, they had a lot of fun

On Saturday there were about 6h program: 5h buhurt and 1h profights. On Sunday were 3,5h of buhurt, 0,5h profights and some softkit fun for visitors.

Manuel von Malottki, the fighter of Decima club and the organizer of Berlepsch, put a great deal of effort to hold the tournament on the high level. And he managed to do it!

Manuel von Malottki: “I prepared many things for the tournament and I think people felt like someone is caring about them. Ever since there was any problem I tried to get a solution and I think people were satisfied. Everything went really well. People behaved very professional and act in kind a routine.

We got more visitors if compare with previous year result”. Improvement of many aspects of the tournament pleased the fighters, and they were not shy to share their impressions.

Peder Anderson, a fighter from the team Det Frie Kompagni (Denmark), told it was obvious that a real fighter has been part of the planning team. He was familiarized with all routine things and arranged it perfectly.

“Berlepsch was really great event. I cannot say I talk on behalf of DFK but I can almost assure that everyone in the club is as satisfied with the tournament as I am.

Judges need more training but it is a general issue and they just need more opportunities like this to train.

The grounding/sand have been used instead of the woodchips was perfect – even wet we could stand on it without gliding.

The fact that fresh water and toilet have been located next to the list and no problems with it was really great.

Also the benches and the place for the fighters to stay and rest have their stuff was very well thought of and made the tournament less stressing and chaotic – very good.

Castle Berlepsch is a very fine place and beautiful. After the tournament, many people were telling about how satisfied they were about the tournament and no one did say anything bad.

Last but not least – have been made a point about the terrific medic team who was quick and professional.

Top dollar, that’s I want to say thank you to Manuel von Malottki for a great weekend”. Manuel found out shortcomings in female fights and he is going to make improvement in this field.

“We found some stuff we can improve next year. The 3 vs 3 women fights were very long and exhausting, so I like to make it 5 vs 5 women next year and raise the reward, so the fighters can train for 1 year now to build up a 5 vs 5 teams. I think this could be an important step for women fights in Europe. I know no tournament where you can get a reward for women buhurt”. In spite of current tournament has been held on a pretty high level, Manuel is thinking how to make it more comfortable. Among his wish-list are:

• We will manage to organize a tribune or anything like that to get better space for visitors.
• I will organize a fighters area, where no visitor can trespass.
• I try to make the women fights more spectacular in raising the reward for women fights and making a 5 vs 5 women Tournament next year on Berlepsch.
• I like to get more teams from other countries. I would like to see some Teams from Austria, France, Belarus, Russia, Poland, Italy and UK.
• I try to organize a gym or any place where fighters could sleep, even if its 10km far away from the tournament.
• I will also offer to make historical campsite near the Castle in good conditions, or modern campsite near the arena. So everyone can choose the advantages or disadvantages themselves. 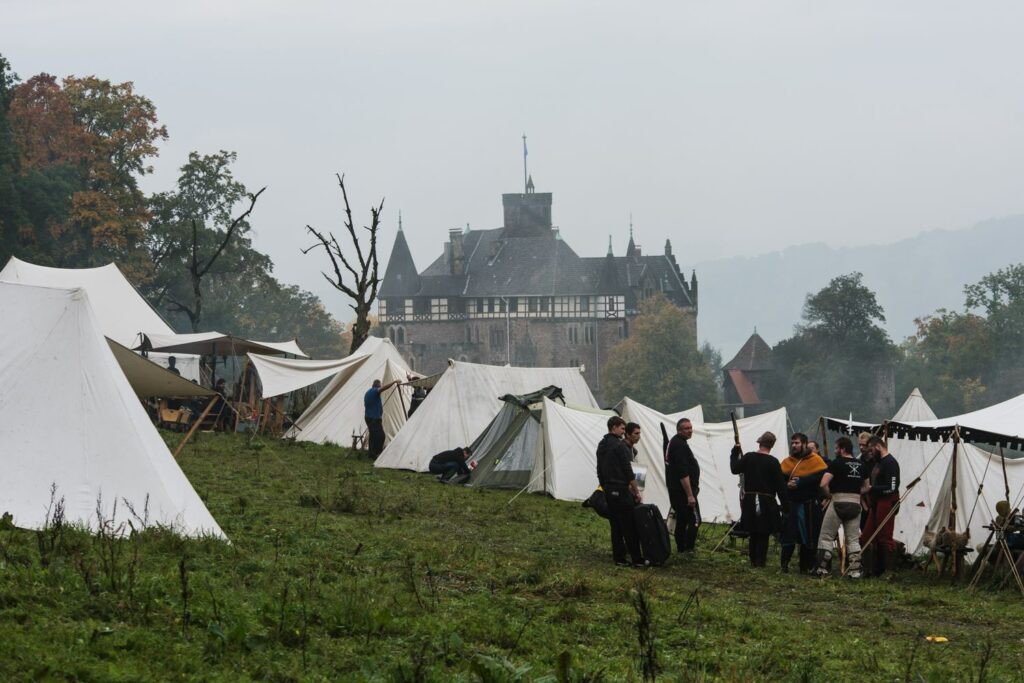 With such a caring and considerate host as Manuel is, on the next tournament, with no doubt, we will be able to see the numerous improvements.

Variety of teams worldwide provided a spectacular show, and here is the list of winners: Such an excellent results, high level of organization and satisfied participants made HMBIA News glad about it. We wish the Berlepsch Cup development and success.

Photos were taken by Thomas Urban.