Quayle, UK: “Willingness to help progress other teams is the most impressive thing”

“Battle of the Nations”-2014 held in Croatia left me and my team unforgettable impressions. We got a lot of precious experience from fighting and watching other teams’ fights.

I can tell about my impressions concerning other teams. First of all, fighting with Russia was an experience that we all needed. It showed me how much I needed to improve. Not just in terms of fitness, I understood that we had to work as a team. Russians acted as a team and, as for me it, was like some kind of art! We learnt a hell of a lot.

I also remember our fight against Italy. It was a tough fight for UK as those guys had some hard hitters …

Watching Israeli fights was brilliant. The guys are not the greatest fighters! But they are fast and work really well as a team.

I loved Belarus team. It`s a bloody brilliant team, just as good as Russian one and they both fight for survival.

Ukraine, Belarus, Poland and Russia … They are amazing fighters! Their fighting is so effective. When those Eastern European teams fight, it’s really hard to oppose them. UK can’t wait to fight with them next year.

And one of the most impressive things that we observed during the days of the Championship was the willingness of all the National Teams to help progress other teams. We tried to help each other and there was the feeling that we were one big team.

We are really looking forward to “Battle of the Nations”-2015 because our team is growing very quickly and has a good pool of fighters. They join us having huge experience in combat sport. 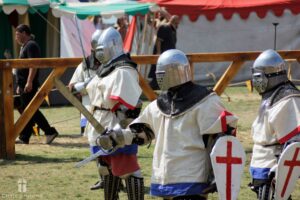