Quayle, UK: “I’m more of a technique fighter; I wait for the right moment and then do my best.”

I started to practise HMB in January 2014, after seeing “Knight Club” on TV (BBC), a story of Team UK at “Battle of the Nations”-2013 in France. I watched it by chance, and I could not believe that such extreme sport could exist. From that moment I knew I had to start practising it, I had to be a part of the movement, I had to fight. I attended a national training event and engaged in the sport.

Historical Medieval Battle, to my mind, is one of the sports where you can really push you limits to the extremes, both mental and physical, you need a high fitness level to be able to compete with your opponents. I think it’s a way of life, not just a hobby.

My armor represents Western Europe, the year 1430. It’s splint armor. I chose it because I find it easy to move in this kind of armor and it can be fitted to my body even if my weight changes. I find it flexibile.

I like “5 vs 5” for the speed and brutality, quick change of tactics; for me it is a preferred category to fight in. I like “1 vs 1” for the amount of skills and techniques needed to compete there.

I also do boxing and Muay Thai, I’ve been engaged in boxing from my early ages, I boxed in the army, I was a member of an army boxing team. I’ve been practising Muay Thai for a year and a half, it helps me to enhance my HMB abilities.

… Concerning his combat features and tricks

My feature is that I’m light, fast and I hit hard. I’m more of a technique fighter; I wait for the right moment and then do my best.

I would name a desire to fight and win, ability to never give up in your training and fighting, ability to think while fighting, adapt your fighting skills to various situations, to have a true grit and determination.

… Concerning workouts and physical training before the tournaments

The season is over, the year was brilliant. I was a member of Team UK at “Battle of the Nations”-2014, got lots of experiences, fought against the world class HMB fighters. The heat of Trogir was a real test of character and determination. The World Championship was nothing like I expected, it was epic and I can’t wait for 2015. Team UK’s fighters were proud of themselves.

I also competed in the UK National Championship in September, I won and became UK national champion, which was a massive step forward. 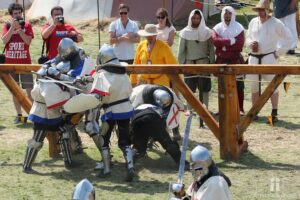