Oscar de la Parra, Mexico: “My role in buhurts is to be tank, my priority is to withstand blows”

I use a XIVth-century Western European harness. It consists of a Kusnacht brigandine with splinted rerebraces, vambraces, cuisses and greaves. Most of the armour is stainless steel, so maintenance is easy.

The helmet is made of 10-12ga mild steel, it is a visored bascinet with a scale aventail. I prefer scales over riveted maille because they offer more structural protection. The visor is based on one of the earliest designs, some call it a shovel-faced visor or griffon visor.

The gauntlets are made of chromium-plated nickel by Grettir T. Slow. They are made to look like fingered gauntlets, but are actually mittens. Many consider them as the best type of hand protection in the sport, and they have been the most important investment in my kit so far.

Concerning the weapons, I usually take a heater shield and a mace because my role in buhurts is to be the tank, so my priority is to withstand blows. Sometimes I can use a two-handed axe, or a longsword, but it depends on the conditions.

All members of my team have either Kusnacht or Visby armour. The main reason here is that those types offer mobility, they are relatively simple to make, and can be easily stored. Some of my guys are already working on their second armour sets, this time going for a “hatanga degel” design. We became interested in this kind of armour because we’ve seen many Russian and Ukrainian fighters using it with great mobility.

I’m proud to say that after two years of hard work my teammates and I have been called to be part of the Mexican National Team, so we are very excited to be going to Prague 2015. 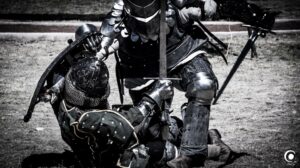 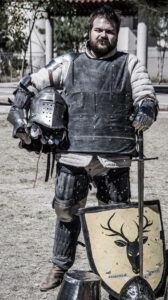