As everybody in HMB movement knows, Spanish Barcelona was held the HMB World Championship Battle of the Nations – 2017. HMBIA News had a little conversation with Spanish captain Christian Bernal, who actually, lives in Barcelona about Spain debut on the world HMB arena: “Having Battle of the Nations – 2017 in Barcelona is especially important at a personal level because it was actually the first official competition I have fought in my home city. There are two HMB clubs in Barcelona. The sport exists here in our country, but there were never tournaments held in Barcelona before, so it was big news for all of us.

Of course it was a big step forward to hold a World Championship here, it gave a lot of attention to the HMB sport as Barcelona is a very popular and influential city. On the other hand, we had a big responsibility as Spain had to give it’s 200% on the list to show what we can do as we’ll all be in the spotlight”. 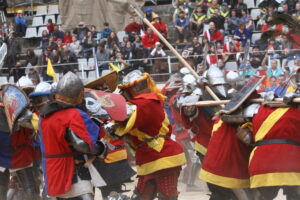 And they did it! The Spaniards have shown themselves a real warriors with the hearts of lions! In duels they met not just with experienced fighters, but with multiple winners of the World Championship! They bravely stood for the honor of their country. However, being at home, of course, they were kindly met by the public, who came all the days of the Battle of the Nations-2017 to support their athletes.